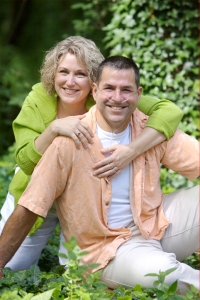 According to the initial diagnosis, Mike Shore should be a dead man. He survived not one but two lung transplants, the first of which almost failed due to one lung in the set being damaged in transport. Under normal circumstances, the doctors would have canceled the operation.

But nothing normal ever happened for Mike and Christa Shore. One of the doctors sensed they needed to perform the surgery—even if they only had one usable lung. Mike survived the transplant but not without edging death several more times before receiving a second transplant with a suitable set of lungs.

Mike Shore was diagnosed in 2005 with Idiopathic Pulmonary Fibrosis (IPF), a disease that scars and stiffens the lungs, making it increasingly difficult to breathe. Mike was never a smoker.

In the darkest moment of their lives, Mike and Christa found a way to hang on to threads of hope in the midst of shattered dreams. Their story has reached thousands in local communities, through speaking engagements, and their passion for faith-inspired art and music.

I am excited to work alongside Mike and Christa to tell their story in book form. That I’ve known Mike and Christa long before Mike’s illness gives me both pleasure and privilege to work with them. But for Mike and Christa, writing this book requires them to revisit painful places. Their aim with this book is to give hope to those in difficult and often unfair circumstances.

Mike and Christa are a husband and wife team whose lives center on helping others. They are community people, knowing firsthand what it means to lose everything, yet overcome. Together they have served in a lifetime of roles, bridging relationship gaps as pastors, youth leaders, counselors, artists, musicians, public education teachers, instructors of the arts, and certified life coaches. Mike and Christa’s public experience extends to speaking and performing at venues ranging from coffeehouses to women’s conferences to large church outreach events around the United States.

We look forward to bringing you their story in the near future, so check back!